Flooded areas near Sirumugai yet to return to normalcy 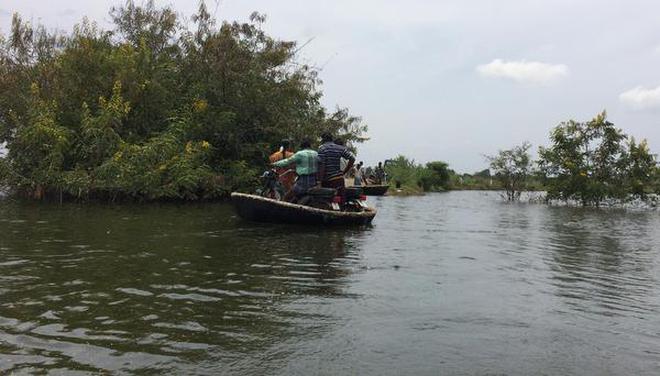 Areas flooded near Sirumugai due to increase in water level in the Bhavani Sagar Reservoir are yet to return to normalcy.

The unexpected increase in water level also damaged banana crop cultivated on at least 500 acres; a majority of them come under the water storage areas of the reservoir encroached upon by farmers. The lone road from Lingapuram to four tribal hamlets remains cut off as the bridge across Kanthayar River, a tributary of Bhavani River, is still under water.

The water level in the reservoir touched 102 feet, the permissible storage limit, last week. Though the reservoir is situated in Erode district, a major portion of its water storage area is spread in Sirumugai in Coimbatore district.

According to farmers, they had encroached upon the fringes of the water storage area at Lingapuram and Pethikuttai. However, the unexpected increase in water level after a gap of 13 years damaged banana plantations that were in near harvesting stage. Some of the plantations were fully flooded and the farmers could not harvest the crop.

“We are using coracles to harvest banana from those plantations that are not fully flooded. As the produce is not fully matured, we will not get the market price. These bananas will be sold as second and third grade produces,” said a farmer from Lingapuram which is 20 km from the reservoir.

As the crop damage occurred in encroached areas, the farmers are unable to seek compensation from the government.

With the bridge across Kanthayar river flooded, around 300 Backward Class families living in Kanthavayal, Alurvayal, Mokkainmedu and Uliyur hamlets are now using coracles to cross the flooded portion.

Sirumugai Forest Range Officer E.N. Manoharan said a boat of the Forest Department was stationed at the place based on directions from the district administration for use in case of any emergency. An alternative road to the tribal hamlets through the forest was also opened this year.