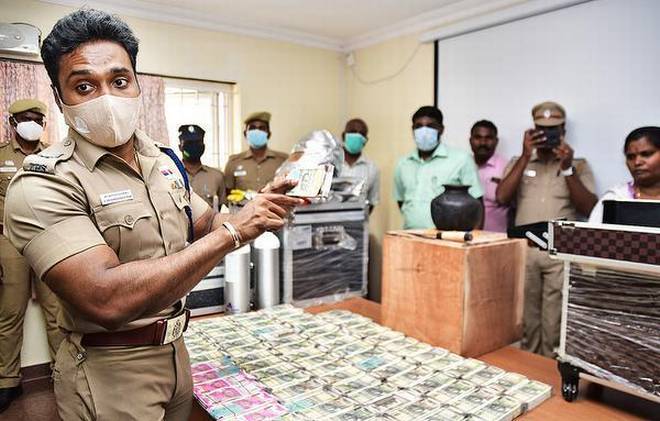 Thursday arrested a six-member gang on charges of cheating two Kerala natives of ₹ 25 lakh by assuring them profit from iridium trade. The arrested have been identified as Dinesh Kumar (34), R. Suryakumar (24) of Ranipet, M. Bojaraj (42) of Tiruppur, S. Murugesan (36), B. Senthilkumar (41) and Venkatesh Prabhu (26) of Coimbatore.

According to the police, the accused collected ₹ 25 lakh from Abdul Kalam (44) and E. Mahroof (58) from Kozhikode, by promising to involve them in iridium trade as investors. The accused claimed that they were having iridium worth several crore and lured the duo to invest money to sell the same to potential buyers. The money was collected from Kalam and Mahroof towards the expenses of buying protective suit to handle iridium and the equipment to test its power.

To convince the duo, the accused donned different roles. According to the police, Murugesan posed as a tribal man who possessed the iridium and Bojarajan acted as an intermediary. Dinesh Kumar and Suryakumar posed as qualified persons who assess the power of the iridium. Senthilkumar and Prabhu aided the four accused and acted as bouncers for their protection.

The accused convinced Kalam and Mahroof that the iridium in their custody could be sold for several crores and they would get a share of the profit.

The police said Kalam and Mahroof met the six accused in a house at Chettipalayam on Wednesday. The duo grew suspicious of the activities of the accused and asked them to produce certain documents to check the authenticity of the rare metal in their custody.

The accused gave a few bundles of currencies to Kalam and Mahroof and asked them to vacate the place. However, the two men continued to argue with the accused. Murugesan, according to the police, attempted to assault them with a knife. They managed to escape from the place and reported the incident to Coimbatore District Superintendent of Police S. Selvanagarathinam. A police team arrested the six accused and recovered fake iridium, fake currencies with a face value of ₹ 99.20 lakh, a knife, two cars and equipment for examining iridium.