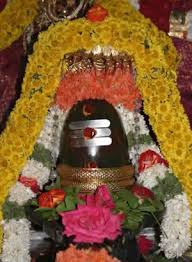 Maha Shivaratri, the night of the worship of Lord Shiva, occurs on the 14th night of the new moon during the dark half of the month of Phalguna. It falls on a moonless February night, when Hindus offer special prayer to the lord of destruction. Shivaratri (Sanskrit ‘ratri’ = night) is the night when he is said to have performed the Tandava Nritya or the cosmic dance of primordial creation, preservation and destruction. Normally, the festival is observed for one day and one night only.

This temple was located in the main entrance of Mettupalayam, and the poojas held on every time of Shivaratri. People in and around this region will take part in this Pooja.

It was located in S.M. Nagar often called as Sathya Moorthy Nagar just 3 Kms From Mettupalayam. This was carved out a cave temple with three lingams (Bana Linga) brought from the River Bhavani. It is believed that the people who took the abode of the Lord, actually attained Moksha.