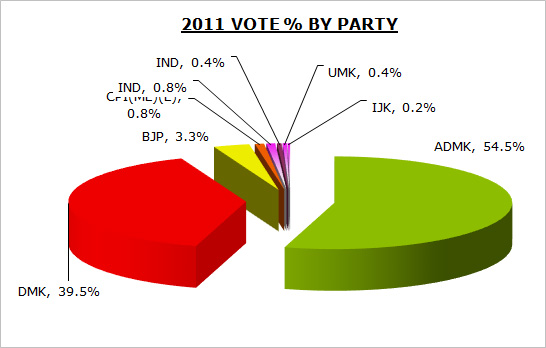 2011 was an important timeline in Tamil Nadu state politics as it was a comeback year for Selvi.J.Jayalalitha. The coalition started to shape after the middle of 2010 with Vijayakanth of DMDK who had secured a handsome percentage of votes in the last election. Vijayakanth to contest under the AIADMK alliance was a great advantage for the AIADMK as the total vote % percentage would increase and dramatically alter the result. As it did. From having about 69 seats in the AIADMK alliance to about 203 seats was a giant leap which was more than 100% increase in its seats. This was primarily due to the 2G Scam that was playing the media in this period. MP A.Raja who was accused of having being involved in the 2G Scam had won the Nilgiris seat this made the people feel the issue very closely and was talked about. Again O.K.Chinnaraj was given the seat from Mettupalayam to contest against the same opponent B.Arunkumar. This election saw a better draw for the AIADMK which won this seat on a comfortable margin as opposed to the 2006 polls where the difference was only 140 votes.  There was a big swing in the state of 12% and the difference only increased at Mettupalayam by 25775 votes (15% difference of the total votes polled).  There were a total of 8 candidates in this election of which 6 of them lost their deposit money. The polling percentage at Mettupalayam was higher than the state average by 3.38% at 81.18%. It was also the highest in the Coimbatore District.  State level issues played an important role such as high inflation, ruling party family members excessive involvement in state affairs and not to mention the 2G Scam. The alliance partners were AIADMK, DMDK, CPI, CPI(M), MMK, Puthiya Tamilagam, All India Forward Bloc, ASMK, RPI, All India Moovender Kazhagam, Tamil Nadu Kongu Ilangnayar Peravai. The Kongu parties were divided into Best Ramasamy’s Kongu Munnetra Kazhagam, and  Tamil Nadu Kongu Ilangnayar Peravai which was a setback for the Kongu community and also the DMK alliance. However it helped the AIADMK to split the vote bank.  Cho Ramaswamy is believed to be one of the key persons in the formation of this winning alliance for the AIADMK. The four laning of the road between Narasimanaikenpalayam and Coimbatore was also a significant irritant for the people using the Mettupalayam – Coimbatore Highway. The extraordinary delay caused a great frustration to the people who could used this as an opportunity to vent their feelings.